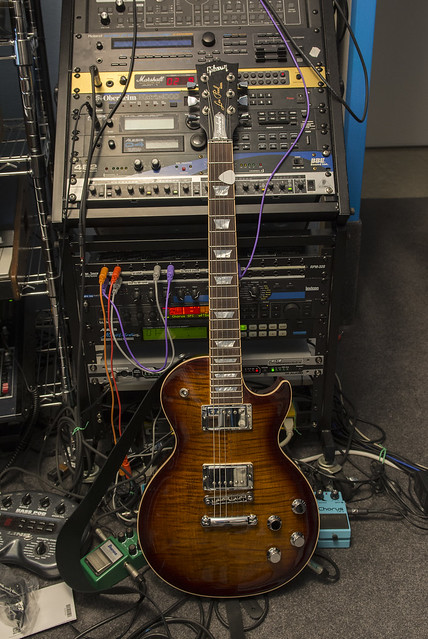 Another dream comes true! Again it took a long time, about 38 years, but it’s definitely well worth it!My first guitar was a really cheap Les Paul copy (and I still have it! .. what’s left of it) and I’ve always wanted one ever since then but I always get caught up with either the price or the capabilities. More and more I loved having a vibrato arm and so I always went for guitars that had one like the Strat or the Wolfgang.

And Les Pauls are pretty expensive. I know there are some cheaper ones now but is it really worth getting one of those? One thing I’ve learned is that you want the best you can possibly get or you will just end up regretting it later.

So I decided it was finally time and went for a fairly expensive version, a 2017 Gibson Les Paul Standard HP. This one has a few nice features the lower models don’t have like the robotuners and push-pull switches on each pot for lots of tonal options.

Having said all that there really isn’t much left to say except WOW! I haven’t been playing a lot of guitar for the past 7 years as I’ve been working on electronic music but I was trying to get back into it lately and I was really liking the feel of my Strat. Fantastic guitar! And the Wolfgang too! But once I got this guitar home and some Fast-Fret on the strings I realized why you pay so much for these things. This is by FAR my best guitar! It feels and sounds fantastic!!

Even with the factory strings on it, which seem to be 10s, it’s very easy to play which is great since I have small and weak fingers. The neck feels a little bit wider which is also nice because it gives you a bit more room and that’s very welcome when playing up on the higher frets.

This version has a fast access heel that makes sliding your hand up above the 12th fret much easier and smoother.

The push-pull switches are nice too and you can change their function inside the back access panel with DIP switches. The knobs are a bit above the body and they wobble a bit to make it easier to get your finger under and lift them up. 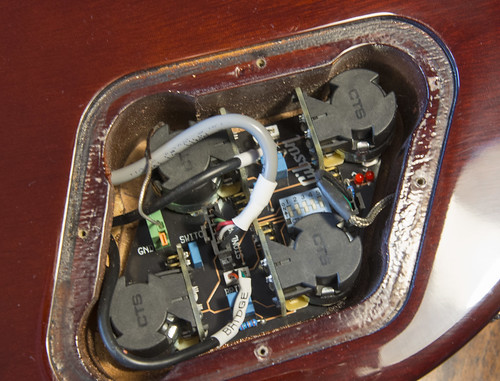 When you lift the neck tone knob you put the 2 pickups out of phase and you get a really nice sharp, bright tone that can be adjusted by varying the volume of each pickup.

The Volume knob switches can be set to either coil tap the pickups or split them. I found that splitting the just gives you a quieter sound. On other guitar’s I’ve found that it gives you a thinner, cleaner sound but on this guitar it’s just a quieter version of the same sound.

The default is a coil tap and this gives you more of a midrangey, throaty sound that I actually prefer.

Did I mention the incredible sustain? Well, it’s a les paul so I shouldn’t have to, but again, wow, amazing. The sound is very smooth overall and quite bright, brighter than I expected. 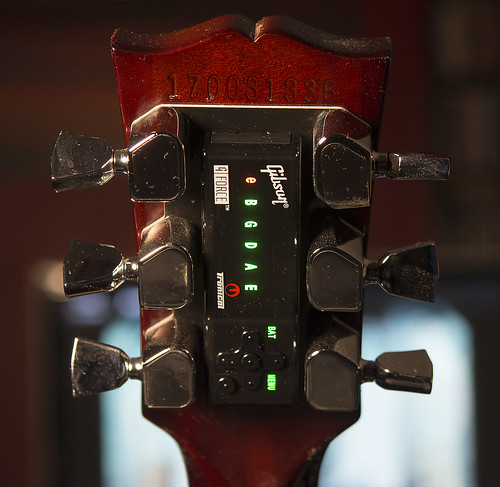 And the robotuners…. Well, I never wanted them and at first decided against the HP model because of it but after thinking it over I thought it might be interesting. They do work but you have to watch the display carefully and after the initial strum pluck only one strings at a time while it finalizes whatever is still not in tune. So far I find that the high B and E strings always have to be done a second time individually before it is finished.

The guitar is going out of tune just a tiny bit fairly regularly (so far) so it’s nice to have the tuner built it to quickly (about 30 seconds) fix it up. It’s also very nice to be able to quickly return to alternate tunings, although I really have no idea what to do with them at this point! I hope that not knowing will actually be a plus and inspire me to come up with things I never would have played in standard tuning.

And I’ll mention the finish because it is spectacular, although I really don’t get to see it myself when I’m playing it.. Someday I still want to get a more standard Les Paul with an old school tea-burst or tobacco burst finish. Until then I have nothing to compare this HP version with so I’m not sure if it’s that much better than any other Les Paul.

Anyway, to sum it up all I can say is WOW. I really wish I had got one of these MANY years ago. I can’t stress enough how important it is to get a high quality guitar. They are sooooo much easier to play and give you much better results so it makes you want to play a lot more.

So that means, there may be more guitar and bass guitar in upcoming songs! We’ll see!