My newest addition just arrived. The Dave Smith Tetra. I’ve had a Mopho for a while and wasn’t all that happy with it but I’m pretty sure that’s because there’s no front panel. It’s really hard to edit a sound when you have to cycle through every parameter and change them one at a time. That’s exactly why I got back into older analog synths. Being able to quickly grab a control and adjust the sound to my liking makes all the difference in the world.

But a few months ago I played around with the Mopho again and really liked how it sounded so I decided I needed a polyphonic version. A P08 would be nice but it lacks some of the features so I decided to get a Tetra. It finally arrived last night and it is absolutely stunning! 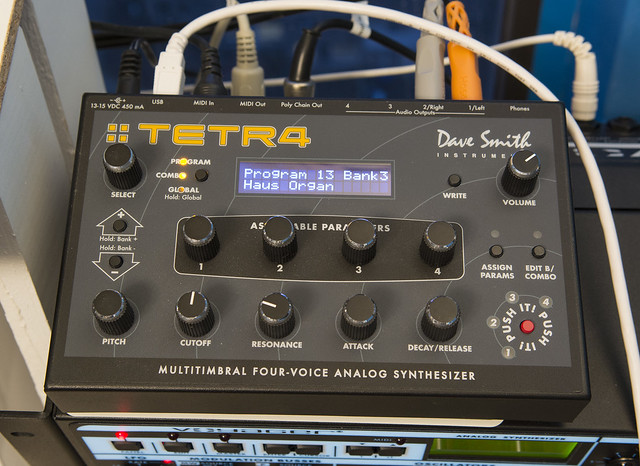 You can see in the picture that this 4 voice synthesizer with tons of features is about one tenth the size of the rack mount Moog Voyager and sounds almost as good. I’ll say almost because obviously the Moog has it’s own amazing sound that is unparalleled, but although the Tetra is a bit different it is certainly just as good!

I’ve only had a short amount of time with it but it is very fat and punchy and is capable of many many amazing sounds that are very Prophet 5-like. I have already started investigating the Soundtower editor and hopefully will be using this synth in the very near future.

I’ve already decided that I need more voices so there is a chance I will get another one for polychaining, but since they have just announced the REV2 which is a P08 with more features and double the voices I may just get one of those.