Once again, just because it’s still important to me: RIP Isao Tomita.

In 1977 I was at a Barrie high school called Eastview. Grade 9 was a lot of fun and a lot of stress but mostly just a whole new adventure after spending the previous 8 years at just one school that sits in the middle of a giant field. But the one thing that stands out in my memory is the music program.

It started out ok and even got me playing piano more than I had been when taking lessons. Believe it or not, I actually liked I Write The Songs by Barry Manilow and loved the piano part at the beginning. But the fun went away when we were told that we had to do something they called “Perfomances”, or what we called “Embarrass us out of the music program”. We had to get up in front of the class and sing a song a Capella. The first time we were allowed to do it with a partner so I was OK (ish) with that. But the next time it had to be alone and I just said NOPE!

At the end of the year the teacher told us that the Performances would count for 50% of our mark so if we weren’t going to do them, we’d fail. I’d already signed up for music the next year (I have no idea why) so this was very bad news. However, the next year I was relocated to a brand new school in town called Innisdale Secondary School and I felt some relief.

My plan was to go to class the first day, which was only a half day, then march straight into the guidance councillors office and drop the class. So I went to the brand new music room with the brand new music teacher and sat through it knowing this would be the last time. So long, suckers!

But then 2 things happened that changed my life. First, a girl in class put up her hand and asked “Will we have to do performances in front of the class?” Actually, a pretty good question. I should have thought of that! The surprising answer was “no”. WHAT?? No?? Ok, I’ll stay! And thus began 4 years of life-changing fun in music!

The second happened a few weeks later when my music teacher, Jim Leonard, brought in some equipment and asked me to help him set it up. The first thing was simple, a cool mixer/amp on top of a big speaker cabinet. We attached legs to the second thing which turned out to be a Crumar Organ.

The third was inside a case. I didn’t know what to expect but I thought it might be a horn or something like that. 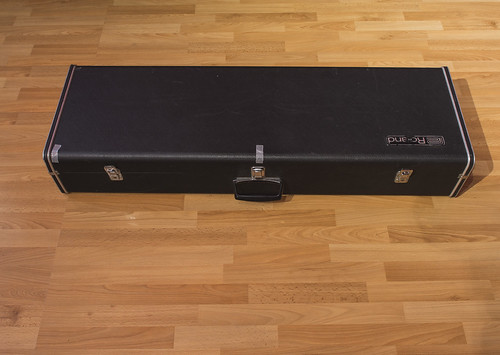 But when he opened it up I saw that it was something with a keyboard. But it also had a section on the left side that was covered with knobs and switches. I may have started to salivate at that point, or maybe hyperventilate, I’m not sure, but I did go kind of numb. I didn’t know what to think but I was intrigued to extremes. I asked what it was and he told me it was a Synthesizer. All I remember about what happened next was very nervously asking if I could try it out some time.

And he said yes.

My life has not been the same since. Step one of this obsession began right then in early October of 1978 and it will continue until I die. Step 2 happened within a year later when Mr. Leonard brought in a record called The Bermuda Triangle by someone called Isao Tomita. I had never heard anything like that and I realized that the synthesizer could be not just a lot of fun, but extremely expressive and take you to worlds you had never before been able to imagine.

That synthesizer turned out to be the Roland SH-1000. A simple one oscillator synth but with a cool divide-down feature that allowed you to turn on several different octaves in either pulse or sawtooth waveforms. It was also the very first synthesizer that Roland ever made (first released in 1973) so I got into this game fairly early and with some of the first available hardware.

So for a few years now, basically since I started collecting these old analog synths, I’ve wanted to get one for myself just to relive those days and to have a piece of electronic music history. I put it off for many years but finally the other night while cruising eBay I found one and thought “It’s time!” and clicked the Buy Now button. Amazingly, it arrived all the way from Japan less than 2 days later! Good work, DHL!

And it works! Mostly. The little red pitch bend button is flattened out and affects the pitch a bit, but that’s easily fixed. The keyboard contacts and all the pots and sliders need cleaning and there are 2 broken tabs that need to be replaced but overall it still works and sounds fantastic!

Like all older analog synths it has a nice electric bite to the sound and even though it’s just one oscillator it’s capable of some very cool and occasionally unique sounds. The random note generator alone has a great sound that just seems to work better than the Sample and Hold function on most synths.

So I’ll clean it up and then it will probably sit with the other synths I don’t use very often, like the Yamaha CS-10 (the first synth I ever owned), the ESQ-1, the Alesis Ion (one of the worst synths I own!) but for me it will be cool just to look at it and remember those days in Room 107, our music room, where we’d jam at very high volumes for hours annoying the teachers in rooms above us. Fantastic days where we discovered the intricacies of playing music, our love of it, and the amazing affect it had on everyone around us.

I wrote all that a few days ago but now it’s Sunday night and I’ve finished the repairs. I opened it up and vacuumed a small amount of dust out of it, cleaned the keyboard J-wires so they don’t re-trigger, and puled the little red pitch-shift button out of it.

I was going to order a new one, thinking that the spring inside had broken or just been flattened out but after spraying some WD-40 into it and pressing it a few gajillion times I got it working again! I sprayed a little DeOxit into the volume pot and then added a little FaderLube and now that pot is working perfectly again too.

So now it’s all back together and working perfectly and frankly, I LOVE it! It sounds amazing! So much bite to the sound, much like the Arp Axxe and being able to stack several octaves at the same time makes it sound like a modular synth. Very cool sound! So instead of it going into the other room, the Arp Quartet has been removed, the JX-8P moved up top, and the SH-1000 has taken it’s place on the shelf beside me. It’s been a good week.