Isao Tomita, composer and synthesizer artist, died May 5, 2016 of chronic cardiac failure at 2:51 p.m. at Tokyo Metropolitan Hiroo Hospital. He collapsed around noon in his home and was taken to the hospital, where he passed away with family at his bedside.
Private funeral ceremonies attended only by family took place on May 7th and 8th.
We announce this news with great sadness.

In October 1978 my music teacher, Jim Leonard, brought into school his Roland SH-1000 synthesizer and my life changed forever. Several months later he brought in a record that mezmorized me and once again helped shape my future in the strangest way I could ever have imagined. The record was called The Bermuda Triangle by Isao Tomita. 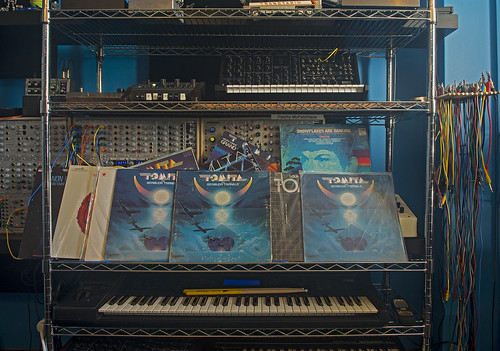 I bought my own copy as soon as I possibly could and listened to it hundreds of times over the next few years. About 5 years later I bought a second copy when the first seemed too scratchy to listen to anymore. Then I bought other albums and then CDs, and now sometimes albums again. In fact, just two weeks ago I ordered from Japan two of his latest releases: Planet Zero and what I assume will be known as his final release, Okhotsk Fantasy.

I only recently discovered his Bolero album and after that Firebird. I don’t know how I missed those ones! I acquired a copy of Firebird on vinyl then got a Quadraphonic copy as well. I also got Bermuda Triangle on Peach coloured vinyl and I’m still looking for a quadraphonic copy of that one even though I don’t actually have a way to listen to it right now.

But even to this day Bermuda Triangle still astounds me and transports me and my imagination to strange new worlds that could never exist even in the boundless infinity of space. And I still don’t know how he did what he did. And I prefer it that way. There needs to be some mystery in music to make it magical.

I sometimes say I’m trying to create music like Tomita’s but the truth is I could never sound anything like him. No one could. Although Wendy Carlos is generally credited as the person who proved that the synthesizer was a real and viable musical instrument, it was Tomita who breathed life into them and made them sound not so much electronic but acoustic with all the emotive capabilities of cello or violin in the hands of a seasoned master. I may aspire to that but I will never equal him.

I find it difficult to fathom that I’m now living in a world without him. I always hoped I could someday meet him but now that’s just another dream that will never materialize. Now I’ll just have to focus on living my own life, making my own music, and trying to make it count for something.