I waited a few years to get this one. I really wasn’t sure I needed it and now there’s an alternative from Behringer that is much cheaper so maybe that would be just as good. I don’t have one of those yet so I don’t know, but I still really wanted the real thing and decided it was time for something new.

So here it is! 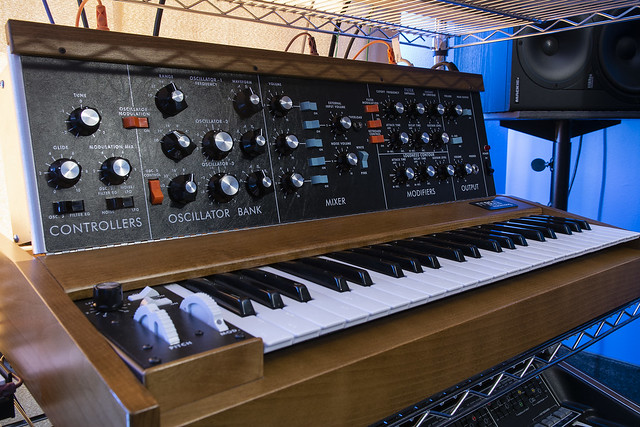 It’s fairly typical for me that this is the first portable synthesizer made but it’s the last one I got! Everyone knows this synth and everyone has owned one…. except me. Nine years ago I got the Creamware Minimax and after a few weeks it became my main synth. I loved it! But now I have the real thing annnnnnnnnnd….. I LOVE IT!

It is absolutely amazing! Much more powerful sounding that you’d think! I’m pretty sure they filter out some of the lows in all recordings because the direct sound is much more powerful than I’ve ever heard before. And I still have the same question I’ve had for a very long time: Why don’t they put three oscillators in ALL monophonic synths? It makes a HUGE difference!!

For the record this is the Minimoog reissue that was made from May 2016 until July 2017 but there are still a few out there in stores. I knew of one in a nearby store and decided I should grab it before it disappeared. Since synthesizers have always been such a big part of my life I thought I should get a Model D brand new in the box. 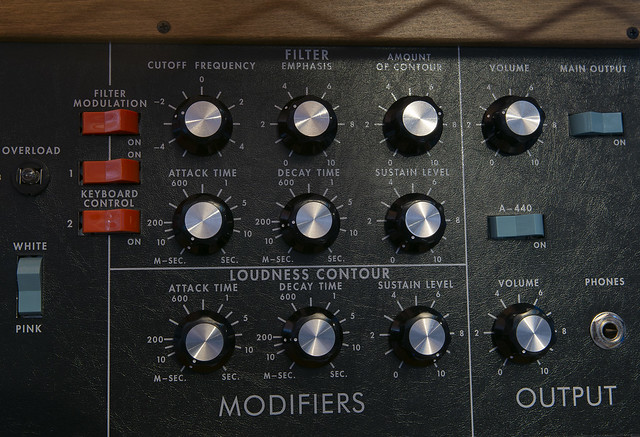 And I did! Although it was out on display and played by many many people over the maybe year or so it was there but still! Brand new Minimoog Model D on May 16 2019!

The sound is extremely fat and thick. Absolutely gorgeous to listen to and play. The keyboard has a fantastic feel which helps a lot. By comparison I can move a little to the left and play the Yamaha CS-15 and I just can’t play anywhere near as well on that keyboard. I’m not sure what it is though… How far the key depresses? How long the keys are? The spring? Or maybe some weighting of the keys. The best have some resin inside the shell of the key to give it some weight. Even the Prophet 12 keyboard which has metal plates doesn’t feel as nice. It’s really hard to tell but the keyboard itself makes a big difference to how well I can play. Right now my favorites are the Minimoog, the Sequential REV 2 and the Polymoog.

An even bigger question is, what’s the difference between the Model D and the Voyager Rack Mount?

Well it’s a few things. One is having the keyboard connected to the instrument. As cool as MIDI is I’ve always preferred having everything in the same unit. Turn it on and start playing. No MIDI cables, no routing, no channel setting, no zippering sound because of the limitations of MIDI, no latency, NOTHING! Much better, much easier!

The second is the menus on the Voyager. It’s nice having a few other options in there but it’s also a real pain when you are trying to be musical. The last thing I want to do is search through menus to find what I want to change. And I find the buttons on the Voyager to be not very friendly. They did it in a minimal way and it’s a bit hard to use. Again, it’s something that slows you down and aggravates you and that detracts from making music.

The third is the patches. When a synth has them you tend to start going through them to find a sound similar to what you want but that can take hours! The beauty of an all manual synth is that every time you use it you just grab the sliders, knobs, and buttons and create the sound you want. Again, it happens very fast and you don’t have to look for anything, it’s all right there in front of you.

And although I haven’t done a serious comparison, I do think the sound of the Model D is a bit better.

There are some drawbacks too but not many. Like all synths, it is what it is and you need a few that sound wildly different to cover a lot of ground. This one covers a LOT of analog ground though! The CS-15, for example, is MUCH thinner sounding but also in a way a bit brighter so it gets used for things the model D just can’t do. 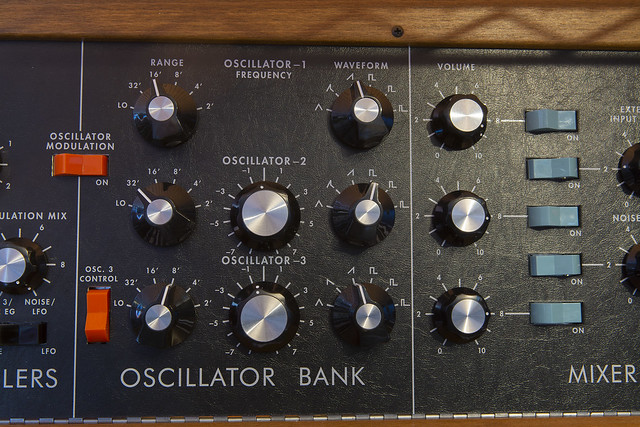 One thing I should point out is it’s BIG! Here in the future synths are a lot smaller but this one is big and heavy! But one thing I love about it is how the whole front panel can be angled toward you. That’s one of the more important things missing from all the new synths. It gets extremely painful leaning forward to look at a front panel from the top down as you are creating sounds. It’s MUCH better to have the panel angled a bit so you can see it from a seated position.

Next I need to get a card called “The MUSE for Minimoog Reissue” from http://www.virtual-music.at/en/ which adds more midi functions to the left hand controllers, which will make it work with the Voyager a bit better. As it is it doesn’t send any MIDI from the modulation wheel which I use all the time. Also this card adds more functionality to the pitch wheel as well.

Well, that’s it for now. I am progressing very nicely on the mixes of my new songs and I may be able to release them by the end of the summer. FINALLY! It will be really nice to move on and write some new songs and use a lot of this new gear I’ve bought.